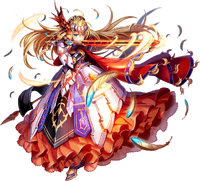 A historical figure who led part of the French troops against the English during the Hundred Years' War.

Her principal accomplishment was the liberation of the city of Orleans where the king of France was anointed.

She was eventually captured by the enemy, tried for heresy and burned at the stake.

Often considered a symbol of catholic faith, as she claimed to have received visions of archangels and saints, she was canonized in 1920.