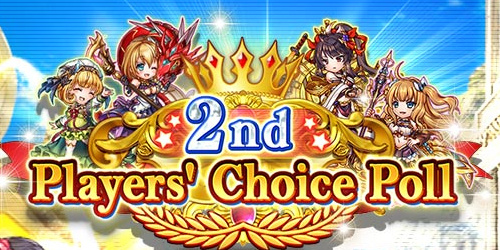 ), and then increases the highest voted characters in each rarity's drop rate in a special gacha once the voting phase has ended. Spending AP and clearing battles grant Support Points (1:1 ratio) as a token for exchanging with rarity ballots to vote an equivalent rarity kamihime.

Every 10 support points can be exchanged for 1 voting ticket of each rarity.

1 ticket is equivalent to 1 vote when consumed.

Total vote count refers to the sum of all consumed voting tickets, not votes per rarity.

The ranking displays top votes in tabs by rarity and will be updated every 00:00 PDT, however it still is uncertain being top 11 and below displayed instead. Proper ranking will be displayed once the voting phase is done.