This is a Light Raid so bringing your Dark team is highly suggested.

Special Behavior - She applies a series of debuffs to your team. DATA down, Atk Down, as well as Atk up to herself. Using Chaos magic will trigger her to recast them.

Normal Overdrive - AoE with Burst Gauge -20 as well as a debuff that prevents BG from building for 2 turns.

Rage Overdrive - Random 7 attacks and Atk Up to self.

SSR Light Axe - This weapon is strong at 96 HP and 2352 Atk. It’s skills are Assault+ and HP. If you still have any SRs on your Light weapon Grid, I would suggest replacing them with this. If you already have full SSR Light Grid, then this will probably not fit in very well and will most likely be fodder.

SR Thunder Gun - This weapon is Atk+ skill and has decent stats. 78 HP 1728 ATK. If you still need Atk weapons for your Thunder Grid, consider adding this one. This is also the release weapon for the event SR Kami.

SR Light Staff - This weapon is Atk+ skill and has decent stats. 66 HP 1752 ATK. If you still need Atk weapons for your Light Grid, consider adding this one.

SR Light Hammer - This weapon is ExceedM skill and has decent stats. 72 HP 1728 ATK. You won’t really be doing massive bursts with SR weapons on your grid, so this weapon can go right to the fodder pile.

Ragnarok Solo Challenge - Defeat Ragnarok Solo with Water Team for 50 Raid Gacha Tickets I find it easiest to do these missions during Burst hour, also there is no mention of not using Elixirs. 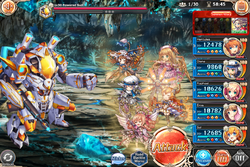 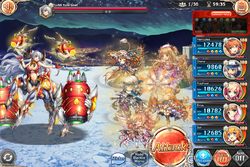 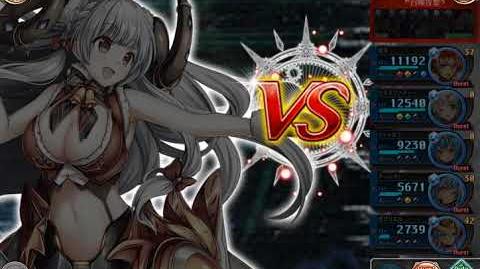 神姫PROJECT 聖光眺めし銀嶺の機影 RAGNAROK 水ソロ
Solo Water vs Ragnarok
Add a photo to this gallery
Retrieved from "https://kamihime-project.fandom.com/wiki/The_Holy_Light%E2%80%99s_Overshadowed_Snow_Peak?oldid=25032"
Community content is available under CC-BY-SA unless otherwise noted.