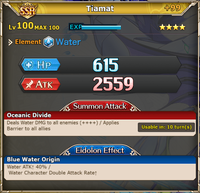 She gives birth to the younger gods who would eventually slay her lover Abzu. She creates the first dragons as an act of revenge and enters war against her children.

She is eventually killed by Marduk, who sliced her in half and then created the heavens and earth from her remains.